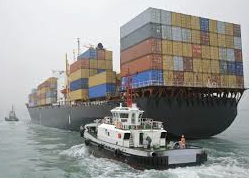 One of the topics of discussion at the meeting in Moscow of the Omsk region Governor Alexander Burkov and Russian Deputy Prime Minister Maxim Akimov was the development of shipping on the Irtysh River and the organization of grain export from Siberian regions to the countries of the Asia-Pacific region by the Northern Sea Route. Alexander Burkov told Maxim Akimov about the need for the Omsk region river fleet and shipping channel. The Governor presented to the Deputy Prime Minister of the Russian Federation a project of the most effective logistics for the supply of Omsk grain to the world market.

The Government of the Omsk region, as one of the promising areas of grain export, is considering the Sabetta deepwater port, built as part of a federal project for the development of the Northern Sea Route. There is a potential opportunity to use this port, so far focused on the shipment of liquefied natural gas, to create a grain terminal. Grain will be shipped by river on the Irtysh and Ob rivers to the port of Sabetta with short-term storage and further shipment by ocean ships via the Northern Sea Route to countries in the Asia-Pacific region, such as Japan, the Philippines, South Korea, and China.

At the same time, it is necessary to assist the federal center in dredging, which ensures the guaranteed depth of the shipping channel along the Irtysh from Omsk to its confluence with the Ob, and equips the river fleet in the Ob-Irtysh basin with specialized ships for agricultural products transporting.

This project, according to the regional government, will revive shipping and open its own gateway to the world grain market for the regions of southwestern Siberia. Alexander Burkov expects the inclusion of the Omsk region in existing state programs to support and develop water river transport. "The topic of development of the Northern Sea Route and shipping in the Ob-Irtysh basin is one of the key issues discussed at the meeting. This is the question of dredging the Irtysh, maintaining water levels, creating a river fleet, which in fact is not so much on the rivers of Siberia. The issue was discussed enough in detail and thoroughly. The Deputy Prime Minister (Maxim Akimov - ed.) Has an interest in this problem. Sabetta port should accept not only liquefied gas, other cargoes should also go. If the Siberian regions, and first of all the Omsk region, will be able to go there with grain supplies, then, of course, this will ensure the loading of the port and increase the traffic density in the North Sea direction, reduce the cost of passage through the ice due to an increase in cargo flow. It is clear that this plan is not for implementation today, but for the future - this is what is necessary for Siberia and for Russia," Alexander Burkov said.

Omsk region is a steadily developing agricultural region and one of the largest grain producers in the Russian Federation. At the end of 2018, 3.2 million tons of grain were produced in the region, of which 1.9 million tons were delivered outside the region.